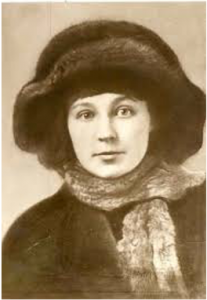 Marina Tsvetaeva (8 October 1892 – 31 August 1941)  was born in Moscow. Her father was a doctor of Roman literature and an art historian. Her mother was a talented pianist.

In 1910, Tsvetaeva published her first collection of poems The Evening Album, to which Valery Bryusov, Maximilian Voloshin and Nikolai Gumilev responded positively. In Koktebel Marina met Sergei Efron. In January 1912, they married. Their first daughter, Ariadne, was born in 1912, and the second, Irina, in 1917. The family endured the First World War in Moscow. Sergey Efron was conscripted in 1917.

In February 1920, the younger daughter died of starvation in a boarding school. A year later, news of Efron came from abroad and Tsvetaeva decided to follow him. They met in Berlin, in May 1922. When in the Czech Republic, she wrote a number of great poems. While in exile, Tsvetaeva’s had an epistolary affair with Boris Pasternak which lasted almost 14 years.

In 1925, the Tsvetaeva-Efron family moved with their son Georgy to Paris. Tsvetaeva’s poetry evenings were a great success and her poems were published. The disagreements between Tsvetaeva and the “old” Russian intelligentsia in exile had become increasingly apparent. Meanwhile, her daughter and husband dreamed of returning to their homeland.

In 1937, Ariadne Efron and Sergei Efron fled to Moscow. In June 1939, Tsvetaeva returned to the USSR. Two months later, Ariadne was arrested, and six weeks after that, Sergei Efron. A period of poverty and wandering began for Marina and Georgy. Tsvetaeva was unable to publish her work.

On 31 August 1941 Tsvetaeva committed suicide. The first posthumous collection of poems by Marina Tsvetaeva was published in the USSR in 1961, 20 years after her death.