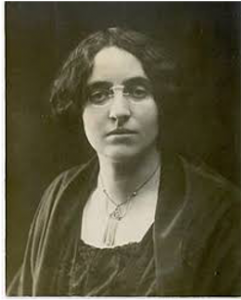 Zofka Kveder was born in 1878 in Ljubljana; soon after her birth, however, her family moved to the countryside. After two years of primary school in her home village, her father sent her to Ljubljana, where she attended a convent school. Back in her home village, she suffered at the hands of her father’s alcoholism and her mother’s religious fanaticism before fleeing to the nearby town of Kočevje, where she worked as a secretary in a land surveyor’s office. After several months she returned home, but her parents did not welcome her. In August 1897, she went to Ljubljana and found a legal practice job copying out files.

In 1898 she published her first short stories. Her first story was published in the magazine Slovenka [Slovene Woman] (1897–1902), the first Slovene magazine for women. In the years to come, Kveder also published many articles in which she touched upon numerous issues affecting women, including situations that range from women wage earners to women’s university education. Ljubljana soon proved too small for her and in January 1899 she left for Trieste, where she stayed for some months and, dressed in men’s attire, visited the harbour’s dumps, where she found inspiration for her writing. Although it was a vibrant port at that time, she could not settle in Trieste but headed for Switzerland to study at a university. After a successful interview with the rector, which she had to pass since she had not graduated from a secondary school, she was able to enrol at Bern University in October 1899. During Kveder’s stay in Switzerland, she wrote an interesting novella, Študentke [Female students, 1899-1900], in which she vividly depicted the lives of Russian and Bulgarian students whose company she had enjoyed. However, it was rather difficult for her to study and work at the same time, living on her own. She decided to go to Prague, where her fiancé Vladimir Jelovšek was studying medicine. Jelovšek was also a decadent poet. On the way to Prague, she spent two months in the artistic capital of Munich.

She arrived in Prague in March 1900 and remained there for six years. In 1901, Kveder gave birth to a daughter Vladimira (Vladoša), but her civil marriage to Jelovšek only took place in 1903. In 1904 she became the editor of the magazine Domači prijatelj [Homefriend]. In 1906, she moved to Zagreb (Croatia), where in 1911 she became the editor of a supplement to the Zagreb daily newspaper Agramer Tagblatt named Frauenzeitung [Women’s newspaper]. Her daughters Marija (Maša) and Mira were born in 1906 and 1911, but at this time her marriage to Jelovšek – who was having extramarital affairs – fell apart irreparably. In 1913, soon after Kveder’s attempted suicide and their divorce (1912), she remarried. Her second husband, with whom she had a church wedding, was the Croatian journalist Juraj Demetrović. In 1915, during World War I, Croatian women chose Kveder as their delegate to the International Women’s Congress at The Hague. Unfortunately, she could not attend this important event due to a miscarriage.

In 1917, she began publishing the magazine Ženski svijet [Women’s World], in 1918 renamed Jugoslavenska žena [Yugoslav woman], in which she published articles on women’s movements in Slovenia, Croatia, and other Slavonic countries. She was grief-stricken when her eldest daughter Vladoša (a student in Prague) died in 1919. The absence of her husband, who became an important politician in the post-war Yugoslav government, and the death of her daughter took a heavy toll on her health and she spent the following years in various spas, trying to recuperate. In 1926, when her health had somewhat improved, her husband informed her that he wanted a divorce, because another woman was expecting his baby. On 21 November 1926, Kveder committed suicide. Two days later, she was buried in Mirogoj Cemetery, Zagreb. At the funeral, female representatives of Slovene, Croatian, and Serbian women’s organizations paid their respects.